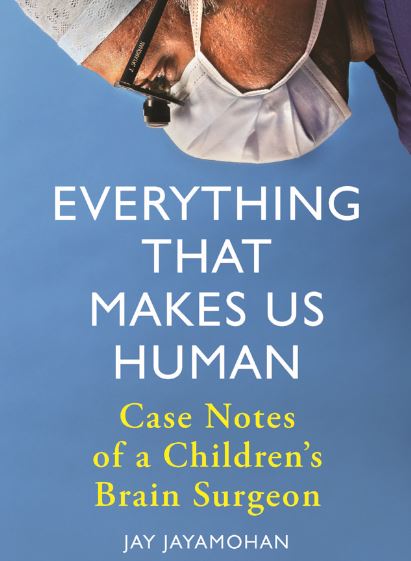 Everything That Makes Us Human: Case Notes of a Children’s Brain Surgeon

‘There are two ways to open a child’s head. The pretty way and the quick way. Usually I shave the hair, use a scalpel to nick the skin then apply an electro-cautery device to burn down to bone level. It’s a slow, precise method and it leaves almost no scarring. But it takes time. Time, the interminable single note of the heart monitor reminds me, I don’t have.’

Jay Jayamohan makes life and death decisions on a daily basis. That’s because he’s a Consultant Paediatric Neurosurgeon in a busy Oxford hospital. Every day, parents put all their faith in him to make their sick children well again. Though he is proud of his successes, he is haunted by every failure. Jayamohan is known not only for his skill in surgery but also his human touch: to him, no patient is only a number.

In this gripping and sometimes heartrending book, Jayamohan – who has featured in two highly acclaimed BBC fly-on-the-wall series following the work of neurosurgeons – brings the highs and lows of the operating theatre into vivid life. Beginning with his struggles as an Asian growing up in 1970s Britain, he chronicles his early days as a medical student and spans decades of extraordinary activity, drawing on case studies from various aspects of his career: not all of which have happy endings. Jayamohan describes how he found the strength to keep going despite terrible setbacks: no matter how many times he is knocked down, he always gets up again to face the next challenge.

Everything That Makes Us Human is a pacy, gripping account of Jayamohan’s life and work. He pulls no punches and owns his mistakes, but the complete picture is one of a man driven to save as many lives as possible.