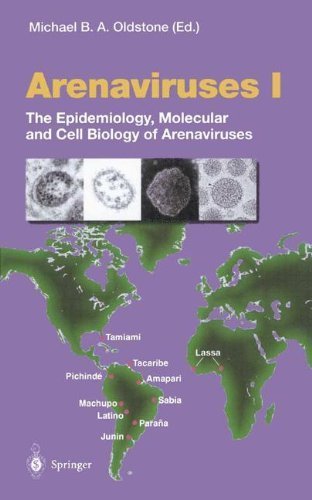 Viruses are studied either because they cause significant human, animal or plant disease or because they are useful materials for probing basic phenomena in biology, chemistry, genetics and/or molecular biology. Arenaviruses are unusually interesting in that they occupy both categories. Arenaviruses cause several human diseases known primarily as the hemorrhagic fevers occurring in South and Latin America (Bolivia: Machupo, Argentine, Junin virus, and Brazil: Sabia virus) and in Africa (Lassa fever virus). Because such viruses produce profound disabilities and often kill the persons they infect, they are a source of health concern and economic hardship in the countries where they are prevalent. Further, they provide new problems for healthcare persons owing to the narrowing of the world as visitors from many countries travel increasingly to and from endemic areas and may incubate the infectious agent taking it from an endemic area into an area where the virus is not expected. Such cases are now being recorded with increasing frequency. In addition to these hemorrhagic fever viruses, the arenavirus lymphocytic choriomeningitis virus (LCMV) can infect humans worldwide,although the illness is most often less disabling and severe than those elicited by the other arenaviruses. Yet, LCMV is of greater concern to non-arenavirologists and experimentalists using tissue culture or animals, etc., because normal-appearing cultured cells or tissues from animals used for research may be persistently infected with LCMV without manifesting clinical disease or cytopathology and may transmit that infection to laboratory workers·. For example, in 1975 Heinemann et aI., recorded 48 cases of LCMV infection among personnel in the Radiotherapy Department and vivarium at the University of Rochester School of Medicine. These persons had contact with Syrian hamsters into which tumors, unknown to be infected with LCMV, were injected. The tumor cells were obtained from an outside, well-known, research supplier who distributed tumor cell lines to numerous laboratories primarily interested in SV40 and polyoma virus research. A subsequent investigation of the 22 tumor lines revealed that 19 yielded in fectious LCMV. Thus, both production of SV 40 and/or polyoma virus from these cells or the use of hamsters infected with such tumors provided an unanticipated human biohazard. In the Rochester scenario infection was spread from those doing basic research, presumably via air ducts to multiple individuals at the medical school/hospital including healthcare workers and patients undergoing radiologic procedures. Similarly, the Centers for Disease Control (CDC), USA, has recorded multiple cases of LCMV infection in families scattered from the northeast coast of the United States (New York) to the western region (Reno, Nevada) originating from hamsters sold by a single pet store supplier in the southeast (Florida). In addition, several investigators found that their hybridomas making monoclonal antibodies were infected with LCMV. The likely source was infected spleen feeder layers from clinically healthy but persistently infected mice purchased from a well-known commercial source which supplies mice to many universities and institutes in North America. Thus, researchers studying such diverse areas as the molecular biology of SV 40, biological effects of Chlamydia, immune response of mice, and producing hybridoma cells or ascites fluids have found their preparations contaminated with LCMV. In these cases, the potentially dangerous effects of LCMV were not anticipated because the virus does not cause footprints associated with most acute viruses (i.e., n~crosis, inflammatory response). The recognized arenaviruses of man, vectors and laboratory models used for their study are listed in Table 1.

This site complies with DMCA Digital Copyright Laws. Please bear in mind that we do not own copyrights to this book / software. We’re sharing this with our audience ONLY for educational purpose and we highly encourage our visitors to purchase original licensed software / Books. If someone with copyrights wants us to remove this software / Book, please contact us immediately.