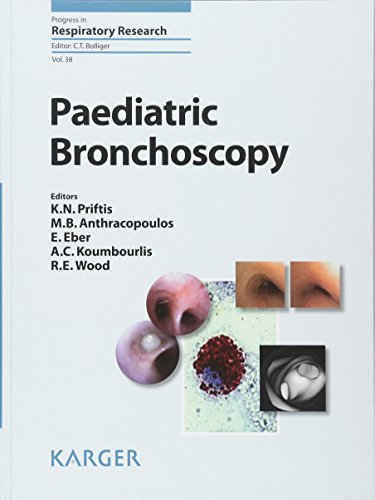 Bronchoscopy has come a long way since the times of Gustav Killian, who in 1897 used a rigid hollow tube and with the help of a headlight inspected the airways of cadavers. It has also markedly advanced from the times of Chevalier Jackson, who introduced both the illuminated endoscope and the practice of interventional endoscopy by removing foreign bodies from the oesophagus and the airway (although it has been rather difficult to surpass his reported success rate of 98% and the reduction of mortality from 24 to 2%). It has also been a long way since 1967 when the flexible fibre-optic bronchoscope was introduced in adult pulmonary medicine. At the time, nobody thought that the technique would ever be applicable to children because in addition to the lack of appropriate equipment there were no paediatric pulmonologists who would demand it and perform the procedure. In this respect, the history of flexible bronchoscopy in children mirrors the development of paediatric pulmonol ogy itself. The introduction, in 1980, of a flexible fibre-optic bronchoscope small enough to allow the inspection of the airways of small infants and children by Robert E. Wood (then at Case Western Reserve University and later at the University of North Carolina, Chapel Hill) provided not only a new diagnostic tool, but also helped define the new subspecialty of paediatric pulmonology. Almost 30 years later, flexible bronchoscopy has become one of the core components of paediatric pulmonary training around the world and an indispensable tool of clinical practice and research.
The aim of the current volume in the series Progress in Respiratory Research is to provide the interested reader with a comprehensive review and insight into paediatric bronchos – copy. Although it is the first on this subject in the English literature, it is not intended to be a classical ‘textbook’ but rather a ‘state-of-the-art review’ on specific clinical and research topics on the subject. Both the introductory and closing chapters emphasize a view of what is anticipated for the future regarding the application of this technique. The book is divided into three sections. The first section covers a wide spectrum of technical issues regarding the preparation for and the performance of flexible bronchos – copy, ranging from common applications such as broncho – alveolar lavage to the less common such as bronchial biopsy, interventional bronchoscopy and total-lung lavage. Separate chapters also present an in-depth review of the two major alternatives to flexible bronchoscopy, i.e. rigid bronchos – copy and ‘virtual’ bronchoscopy. The second section of the book is devoted to the bronchoscopic appearance of the normal upper and lower airways as well as congenital and acquired abnormalities. The third section deals with the application of paediatric bronchoscopy in specific clinical conditions including asthma, atelectasis and plastic bronchitis, cystic fibrosis and other chronic suppurative lung diseases, endobron – chial tuberculosis, chronic cough, lung transplantation and immunosuppression.