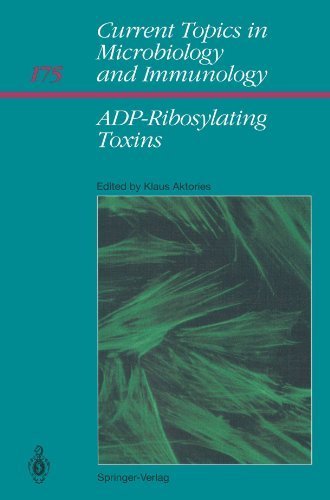 ADP-ribosylating toxins have been the focus of intensive research for more than 30 years. Researchers from diverse fields of science have taken an interest in these bacterial toxins; they are studied, for example, by microbiologists, biochemists, cell biologists, and pharmacologists. There are two principal reasons for the broad and still growing interest in ADPribosylating toxins. First, insights into the structure and functions of the toxins might be the key to prevention and treatment of diseases caused by the toxin-producing infectious microorganisms. Second, the ADP-ribosylating toxins provide potent and often unique pharmacological tools for the study of the physiological functions of their target proteins. The latter is especially the case with cholera and pertussis toxins, which both modify the IX-subunits of heterotrimeric G-proteins involved in signal transduction pathways. These toxins have proved invaluable in extending our basic understanding of the regulation of hormone-controlled signal transduction.
This volume provides a review and an update of recent studies on the basic properties of bacterial ADP-ribosylating tbxins and/or exoenzymes. Our current knowledge of the cellular entry mechanisms of ADP-ribosylating toxins is reviewed by MADSHUS and STENMARK. WILSON and COLLIER then deal with recent insights into the enzyme mechanism and active site structure of diphtheria toxin and Pseudomonas aeruginosa exotoxin A, which modify elongation factor 2. Toxins which ADP-ribosylate heterotrimeric G-proteins involved in transmembrane signal transduction are the subject of the next two chapters. SERVEN11, Moss and VAUGHAN describe the regulation of adenylate cyclase by cholera toxin and the enhancement of the cholera toxin-induced ADP-ribosylation by guanine nucleotide-binding proteins, the so-called ADP-ribosylation factors, and the review of pertussis toxin by GIERSCHIK lays emphasis on toxin structure-function relationship, toxin-Gprotein interactions and the functional consequences.of G-protein ADP-ribosylation. A chapter by AKTORIES, WILLE, and JUST discusses recently described actin-ADP-ribosylating toxins such as Clostridium botulinum C2 toxin, C. perfringens iota toxin, and other iota-like toxins. Together with the mycotoxins cytochalasin and phalloidin, these ADP-ribosylating toxins appear to be important new tools with which to study the role of actin in various physiological processes. AKTORIES, MOHR, and KOCH deal with clostridial exoenzymes which modify small GTP-binding proteins. C. botulinum C3 ADP-ribosyltransferase, C. limosum exoenzyme, and their eukaryotic protein substrates Rho and Rac are discussed in detail. Last but not least, COBURN briefly reviews P. aeruginosa exoenzyme S. Much less is known about this ADP-ribosyltransferase and its eukaryotic substrates. Recent studies indicate that, again, small GTP-binding proteins (Ras proteins) are the preferred substrates of the enzyme.
This book offers an exciting and comprehensive account of recent developments in the field of ADP-ribosylating toxins and should inspire both further research in this area and the use of these toxins as tools in biological science.

This site complies with DMCA Digital Copyright Laws. Please bear in mind that we do not own copyrights to this book / software. We’re sharing this with our audience ONLY for educational purpose and we highly encourage our visitors to purchase original licensed software / Books. If someone with copyrights wants us to remove this software / Book, please contact us immediately.

Apoptosis in Immunology PDF – Current Topics in Microbiology and Immunology

Apoptosis in Immunology PDF – Current Topics in Microbiology and Immunology