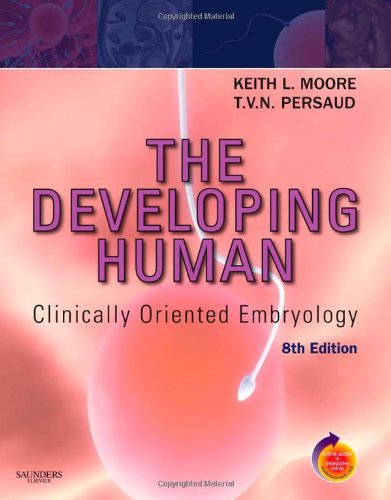 Human development is a continuous process that begins when an oocyte (ovum) from a female is fertilized by a sperm (spermatozoon) from a male. Cell division, cell migration, programmed cell death, differentiation, growth, and cell rearrangement transform the fertilized oocyte, a highly specialized, totipotent cell, a zygote, into a multicellular human being. Although most developmental changes occur during the embryonic and fetal periods, important changes occur during later periods of development: infancy, childhood, adolescence, and early adulthood Development does not stop at birth. Important changes, in addition to growth, occur after birth (e.g., development of teeth and female breasts).
DEVELOPMENTAL PERIODS
It is customary to divide human development into prenatal (before birth) and postnatal (after birth) periods. The main developmental changes occurring before birth are illustrated in the Timetable of Human Prenatal Development (Figs. 1-1 and 1-2). Examination of the timetable reveals that the most visible advances occur during the third to eighth weeks of embryonic development. During the fetal period, differentiation and growth of tissues and organs occur. The rate of body growth increases during this period.
EMBRYOLOGIC TERMINOLOGY
The following terms are commonly used in discussions of developing humans; several of these terms are used in the Timetable of Human Prenatal Development. Most terms have Latin (L.) or Greek (Gr.) origins.
Oocyte (L. ovum, egg). The female germ or sex cells are produced in the ovaries. When mature, the oocytes are called secondary oocytes or mature oocytes.
Sperm (Gr. sperma, seed). The sperm, or spermatozoon, refers to the male germ cell produced in the testes (testicles). Numerous sperms (spermatozoa) are expelled from the male urethra during ejaculation.
Zygote. This cell results from the union of an oocyte and a sperm during fertilization. A zygote or embryo is the beginning of a new human being.
Gestational Age. It is difficult to determine exactly when fertilization (conception) occurs because the process cannot be observed in vivo (within the living body). Physicians calculate the age of the embryo or fetus from the presumed first day of the last normal menstrual period. This is the gestational age, which is approximately 2 weeks longer than the fertilization age because the oocyte is not fertilized until approximately 2 weeks after the preceding menstruation (see Fig. 1-1).
Cleavage. This is the series of mitotic cell divisions of the zygote that result in the formation of early embryonic cells, blastomeres. The size of the cleaving zygote remains unchanged because at each succeeding cleavage division, the blastomeres become smaller.
Morula (L. morus, mulberry). This solid mass of 12 to approximately 32 blastomeres is formed by cleavage of a zygote. The blastomeres change their shape and tightly align themselves against each other to form a compact ball of cells. This phenomenon, compaction, is probably mediated by cell surface adhesion glycoproteins. The morula stage occurs 3 to 4 days after fertilization, just as the early embryo enters the uterus.